The Auburndale City Commission has given a commendation to Amir Coston, a local Auburndale High School student for his quick and effective response to a fire that occurred on April 4, 2021.

On Easter Sunday, Amir was visiting with family members in the Auburndale area. As one of the family was leaving, they noticed that a neighbor had a fire in their yard, and it was getting out of control.

Other family members were notified and came running down the street to assist. Amir immediately grabbed an available fire extinguisher and, without hesitation, started extinguishing the fire.

When the extinguisher was emptied, Amir located a nearby water hose and continued spraying the fire with water until firefighters arrived on the scene. Furthermore, Amir continued to assist the firefighters until the fire was completely extinguished.

On April 28, 2021, the Auburndale Fire Department invited Amir Coston and his family to a special ceremony at the Samuel P. Efurd Station. Amir was presented with a commendation from the Fire Department and the family was given a tour of the station. Amir was also given the chance to put on bunker gear and show off his firefighting abilities with an extinguisher demonstration and a test of the high pressure fire hose from the E-421 fire truck. 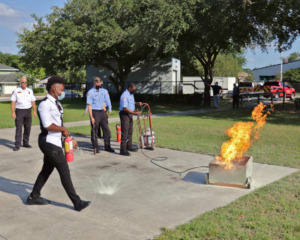 The City of Auburndale commends Amir for his willingness to quickly spring into action and assist community members and firefighters during this emergency. Amir’s quick actions helped contain the fire and thus limited the fire’s spread and damage. Amir is so greatly appreciated for his efforts.