After Hours:
Persons requiring police services after hours may seek assistance by utilizing the call box at the lobby entrance or by calling (863) 401-2240. 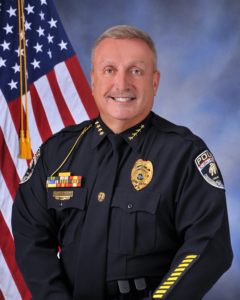 Terry Storie began his law enforcement career in 1986 as a Deputy Sheriff for the Burt County, Nebraska Sheriff’s Office prior to enlisting in the United States Marine Corps. Following his honorable discharge as an E-4 Corporal in 1991, Storie completed the Law Enforcement Academy at Polk Community College in May of 1992. He started with the Highlands County Sheriff’s Office as a Deputy, before transferring to the Polk County Sheriff’s Office (PCSO) in March of 1993. Upon his retirement with twenty-eight (28) years of service with PCSO and working through the ranks to the position of Captain, Storie would step into municipal police work with the Auburndale Police Department.

He holds an Associate of Arts Degree from Saint Leo University, a Bachelor of Arts Degree in Organizational Management and a Master of Business Administration Degree both from Warner University. He has obtained numerous law enforcement and leadership certifications including from the Florida State University Certified Public Manager program, the Police Executive Research Forum at the Senior Management Institute for Police, and the Northwestern University, School of Police and Staff Command, in which Terry was selected Class President for Class #356. He was also formerly on the Board of Directors for the Boys and Girls Club of Polk County. 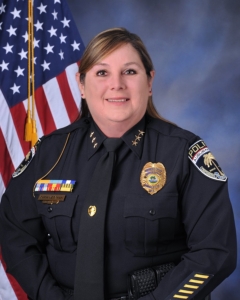