On the morning of Thursday, June 3, Former City Manager Bobby Green was awarded the Richard (Dick) Simmons Lifetime Achievement Award by the Florida City and County Management Association during their 2021 Annual Conference in Orlando. This award is given to an exemplary individual who has served the profession with steadfast dedication, innovation, and the highest standard of excellence.

Bobby Green recently retired from his position as City Manager on April 1, 2021, after 30 years of service to the City of Auburndale. In that time, he brought many innovations to the City of Auburndale, including Family Night with the City Commission and the annual Commission Day. He encouraged others to continually advance their education and all seven of his Assistant City Managers have gone on to serve as City Managers in their careers. Bobby Green has also contributed greatly to the International City/County Management Association (ICMA) and was honored in 2013 by having Florida’s first ICMA chapter at the University of South Florida named after him. 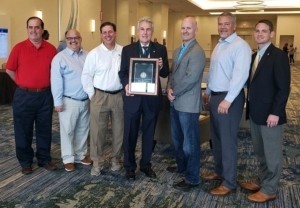